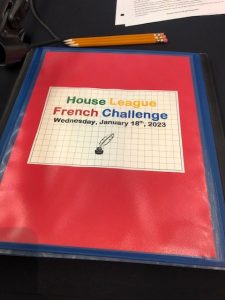 This week I enjoyed watching our students compete in the House League French Challenge on Wednesday afternoon. Proudly wearing their team colours, the large number of competitors worked their way through a syllabus of vocabulary and idiomatic expressions, spurred on by the clock and prepared well by their Chef de Mission, our very own Madame P. For close to an hour, students across several grades stepped up to the mic and demonstrated their growing confidence in their second language. It was an impressive and entertaining feat to witness!

Besides rooting for each student (…while, at the same time, silently challenging myself!), I was struck by just how much French vocabulary our students are mastering in their elementary years. For the young scholars who have the desire, work ethic, and natural talent in languages, their future in French will be directly attributable to the solid food they have been fed by Madame. From enriched club activity and course content to culinary experiences and theatrical opportunities, the French program experienced by our students will abide in their memory for years.

And speaking of memory – our French program is unique for another reason. While making rich use of creativity and fun, it also strives to keep the memory alive and full, not weak and empty like so many other modern pursuits for children. Increasingly in many modern “enlightened” schools, our old friend, Facts, has become a bit of a pariah. It is stated with pride by some educators today that “…we don’t teach by rote memorization. We prefer to teach critical thinking. We prefer to tap into the imagination”. Well, critical thinking and imagination are great, but they are not possible without a solid foundation in teaching and learning supported by facts.

If our teachers only every focused on “the process” without the all-important inputs and outcomes, we would never prepare our students adequately for the path. We would definitely never turn out the next Dante or Mozart! A developed memory is a wondrous and inspiring storehouse of things seen and heard and done – and it can do so much more than a mere search engine. Without building the “library” of a well-conditioned memory, one’s imagination doesn’t have a lot to work with or play with!

So, while drudgery is never the end-game, relegating our old friends, Facts and Memory, to the dustbin of learning does a major disservice to our students and to their intellectual development. When Mozart was a kid, the story goes that his father took him to Rome where he played from memory the complete score of a Renaissance polyphony only having “heard” it once! Yes, Wolfgang was a prodigy, but if we want to ensure that one of the keys to creativity and imagination is missing forever, we will disregard the value memory training.

If we want to stifle imagination, we can encourage intellectual laziness by never insisting that young people actually master any “facts” at all.

And we will see the result, as imagination and ingenuity become starved by being shut-off from the raw materials they need to thrive!