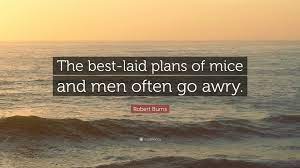 On Tuesday, January 25th, many people with Scottish roots will celebrate Robbie Burns Day, which commemorates the life of the famous Scottish poet, Robert Burns, born on January 25, 1759. The day especially celebrates his contribution to Scottish culture the world over.

Burns’ best known work is likely the familiar lyrics of Auld Lang Syne, sung in many places on New Year’s Eve each year. But I became acquainted with Robbie Burns in English class in early high school in the 1980s when we studied his well-known poem, “To A Mouse” (my personal favourite). It was written in 1785 after the poet accidentally destroyed a mouse’s nest with his plough. In it, Burns expresses sorrow for the little animal’s plight, prompting him to feel compassion for all vulnerable creatures and, by extension, to reflect on the unpredictability and pain of our common human existence.

One of its most memorable lines, “…the best laid schemes o’ mice an’ men gang aft agley…”,  has been playing on a loop in my head for the past several months! A modern English translation might go something like this: “the best laid plans of mice and men often go sideways” and it is surely a contemporary mantra for life in schools these days. We have tried very hard to anticipate and plan around every possibility only to be thwarted by decisions beyond our control.

I have spent my career in accredited independent schools, my children have attended them, and I have seen firsthand the benefits of pragmatic decision-making that avoids the bureaucratic obstacles of larger systems in the ultimate interest of the children we serve. Independence in education is very valuable and I want to assure you that our school team is working hard to prioritize the best way of doing things for kids (…in the midst of the ongoing “flip flopping” of policies, information, and decisions that are beyond our control).

At Matthews Hall, we have taken our public health responsibilities seriously from day one and we continue to do so. We have also balanced them with our duty to the next generation of children. They need to be learning with other people. They are in a safe, prudent, proactive, and common sense environment. We want them to be here. We want to be here. They need to be here. It is that simple.

Once the fetters are removed (…and there are many and some are contradictory), we will move freely in this independent space again.

It’s undeniable that all of our families are feeling the frustration of the current moment. It’s also undeniable that there has been significant impact on the health and wellness of our youth during the last two years. To help limit the lasting negative effects, we must all move forward with confidence, courage, and calm in our schools, communities, province, and country.

Here’s to beginning again on Monday – may it be the last time we need to say it.