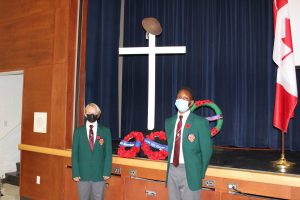 November is always a bit of a challenging month. For starters, the days shrink noticeably and somehow both the morning and evenings are darker sooner (…something about the distance between the northern hemisphere and the sun and the tilt of the earth’s axis!). It’s also the time when the fall begins to collapse in preparation for the “bleak midwinter” and our neighbours and friends begin to hibernate like squirrels. People rush home faster from work, kids are in PJs earlier, and we look for comfort around the hearth as we “batten down the hatches” for the long haul to spring. Sound familiar? There is something about the slowing rhythm of the year that seems innate as the living things around us go dormant and begin to fade.

And then there’s Remembrance Day on November 11th. In the middle of this challenging month, we pause to remember the truly significant events of our culture and world, which are represented by the annual memorials of war and peace, conflict and resolution. In schools across Canada, the rituals of remembrance are perennial and important. It is truly where school children learn the value of a “pittance of time”.

“A Pittance of Time” is a 2002 Canadian folk song by Terry Kelly, which reminds people to observe the two-minute’s of silence on Remembrance Day. He was inspired to write the song after he saw a man in a shop failing to do so. On November 11, 1999, Kelly was in a drug store which announced over the public address system that they would be observing two-minutes of silence at 11:00 A.M. for Remembrance Day. Kelly observed the silence, but noticed a man in front of him in line demanding that the clerk run his shopping through during the silence. Kelly also noted that the man’s daughter chastised him afterwards by saying: “Daddy, you were supposed to be quiet through that time”. Kelly’s disappointment about this lack of respect led him to write “A Pittance of Time” as a plea for people to observe the two-minute silence on Remembrance Day.

On Thursday, the students and staff at Matthews Hall gathered once again in person and via livestream to recognize this important Canadian tradition. After a year and a half of pandemic accommodations and work-arounds, our students and teachers paused again together for a “pittance of time” to reflect on the ultimate sacrifice paid by so many for the cause of peace and freedom around the world.

Many of these same conflicts are pressing down on us again today in areas of the world tormented by war, conflict, injustice, and hatred.  And some of them are even close to home.

As we work to inculcate the “arts of peace” in our children and students at home and at school, we do so in profound gratitude for the rights and freedoms that were won for each of us – and at such a dear price. Stopping each November 11th is actually the least we can do in our schools, public space, workplaces, and homes.

While it may only be a “pittance of time”, it’s the least we can do.