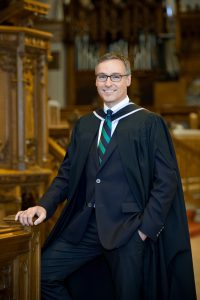 Today, students, staff and parents marked our annual Remembrance Day observance.  As has become our custom over the past several years, today’s assembly was structured in the round, with participants seated facing one another, their attention focused on the sacrifice of those who served in the World Wars that threatened liberty around the world.  This year we remembered, in a special way, the year “the guns fell silent” in Europe on November 11, 1918.  This anniversary is especially poignant when considered in light of the year our school was founded. 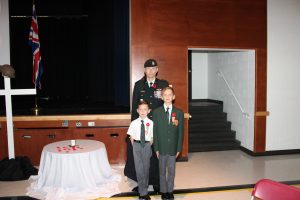 Matthews Hall (“Miss Matthews’ School”) began to take shape as the world was recovering from the savagery unleashed by the assassination of an archduke in Sarajevo.  The crucible in which our school took shape could not help but be touched by the drama and terror of the nationalism and militarism that had crushed Europe during the preceding years. Miss Matthews and her contemporaries, here in London, Ontario, would have seen the news reels, listened to the wires, and discussed the progress and setbacks of the Allied troops who were fighting across the ocean for values held so dear in the West – freedom, democracy, culture, human rights, faith and reason.

A survey of our school’s priorities can be traced to these early days of our evolution.  As a private school at the beginning of the twentieth century, students would have been encouraged to master a broad range of learning to help them become worthy citizens. Miss Matthews would have cultivated a curiosity and the willingness to question and judge fairly; as well as an awareness of allowing children to learn how to draw ethical lines clearly, cleanly, and publicly.

Remembrance Day is a solemn commemoration that takes place on November 11th each year and is commemorated by all Commonwealth countries to mark the end of World War I. Hostilities formally ceased on the 11th hour of the 11th day of the 11th month in 1918 when the guns fell silent, ending more than four years of slaughter on a scale never before experienced in human history. After the war ceased, people were united in the belief that such a conflict must never again be allowed to happen.

The first step in the process of prevention is to remember the sacrifice of those who served, which we begin today and will unite with those who will do so at cenotaphs in communities across the country on Sunday morning.

King George V (the grandfather of Queen Elizabeth II, whose portrait most definitely hung on the wall of Miss Matthews’ first classroom) issued a proclamation in 1919 stating that “all locomotion should cease, so that, in perfect stillness, the thoughts of everyone should be concentrated in reverent remembrance of the glorious dead”.

United with schools across the country, we are proud to carry on this noble stillness with our students – this year and every year.